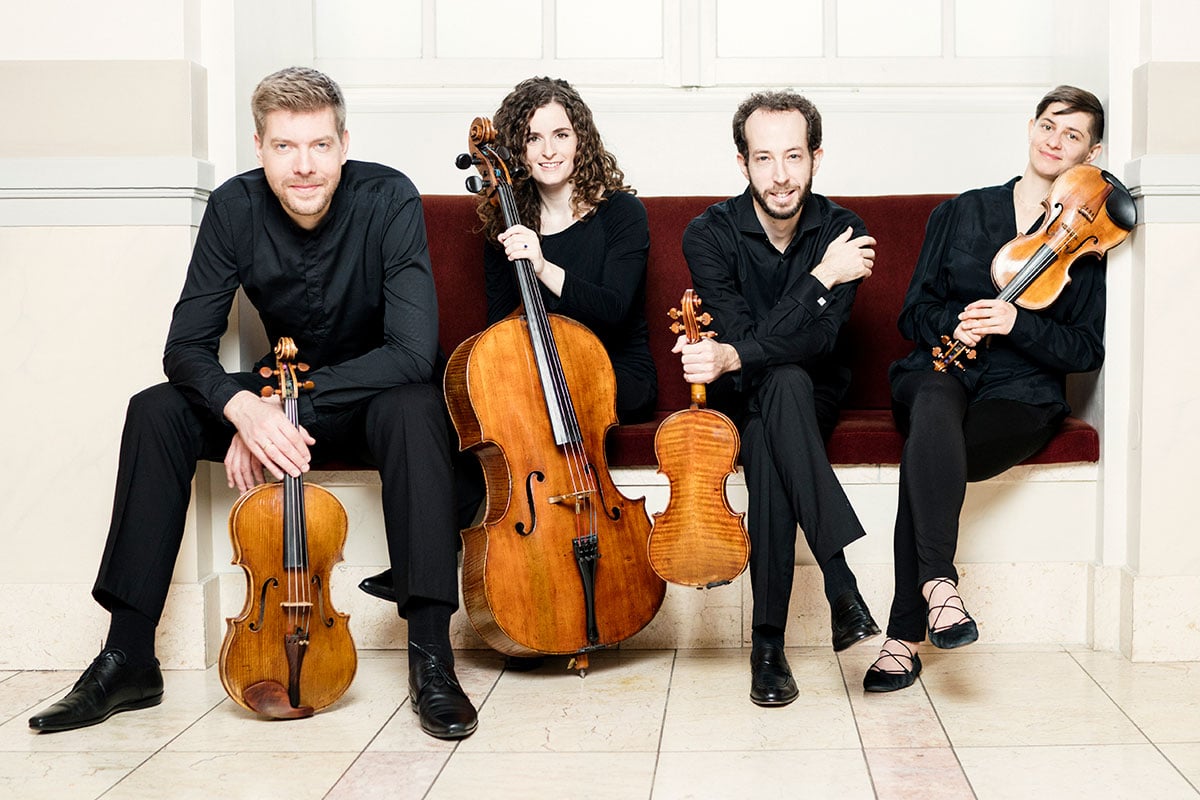 Distinguished by its virtuosity, probing musical insight, and impassioned, fiery performances, the Ariel Quartet has garnered critical praise worldwide for more than twenty years. Formed when the members were just teenagers studying at the Jerusalem Academy Middle School of Music and Dance in Israel, the Ariel was named a recipient of the prestigious Cleveland Quartet Award, granted by Chamber Music America in recognition of artistic achievement and career support. The quartet serves as the Faculty Quartet-in-Residence at the University of Cincinnati’s College Conservatory of Music, where they direct the chamber music program and present a concert series in addition to maintaining a busy touring schedule in the United States and abroad.

Recent highlights include the Ariel Quartet’s Carnegie Hall debut, a series of performances at Lincoln Center together with pianist Inon Barnatan and the Mark Morris Dance Group, as well as the release of a Brahms and Bartók album for Avie Records. In 2020, the Ariel gave the U.S. premiere of the Quintet for Piano and Strings by Daniil Trifonov, with the composer as pianist for the Linton Chamber Music Series in Cincinnati.

The quartet has dedicated much of its artistic energy and musical prowess to the groundbreaking Beethoven quartets and has performed the complete Beethoven cycle on five occasions throughout the United States and Europe. The Quartet has written a powerful and comprehensive series of program notes on the sixteen quartets, open to the public on their website. The Ariel Quartet regularly collaborates with today’s eminent and rising young musicians and ensembles, including pianist Orion Weiss, cellist Paul Katz, and the American, Pacifica, and Jerusalem String Quartets. The Quartet has toured with cellist Alisa Weilerstein and performed frequently with pianists Jeremy Denk and Menahem Pressler. In addition, the Ariel served as Quartet-in-Residence for the Steans Music Institute at the Ravinia Festival, the Yellow Barn Music Festival, and the Perlman Music Program, as well as the Ernst Stiefel String Quartet-in-Residence at the Caramoor Festival.

Formerly the resident ensemble of the Professional String Quartet Training Program at the New England Conservatory, from which the players obtained their undergraduate and graduate degrees, the Ariel was mentored extensively by acclaimed string quartet giants Walter Levin and Paul Katz. It has won numerous international prizes in addition to the Cleveland Quartet Award: Grand Prize at the 2006 Fischoff National Chamber Music Competition and the Székely Prize for the performance of Bartók’s String Quartet No. 4, and Third Prize at the Banff International String Quartet Competition. About its performances at the Banff competition, the American Record Guide described the group as “a consummate ensemble gifted with utter musicality and remarkable interpretive power” and noted, in particular, their playing of Beethoven’s monumental Quartet in A minor, Op. 132, as “the pinnacle of the competition.”

The Ariel Quartet has received significant support for its studies in the United States from the American-Israel Cultural Foundation, Dov and Rachel Gottesman, and the Legacy Heritage Fund. Most recently, they were awarded a grant from the A.N. and Pearl G. Barnett Family Foundation.